We received the detailed ultrasound early this morning.  "No significance of isolated bilateral CP cyst" Woohoo!!  Everything else came back normal so the cyst is nothing to worry about.

I was surprised how detailed the scan was.  They measured just about everything you can imagine, even the baby's ears.  Since I experienced years of playground ridicule and was nick-named Dumbo in school, I was happy to read that the baby has average sized ears.  Later in life, I embraced my big ears and learned how to wiggle them to impress first-dates.  Brent is such a lucky guy. 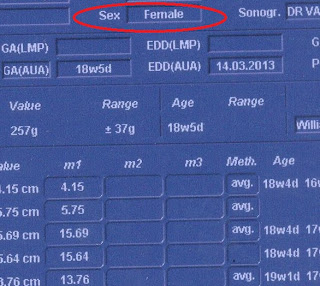 The scan came in the early hours of the morning, so I was reading the details with one eye opened and half asleep.  Reading through the scan, I saw something that totally took me by surprise.  "Sex: Female".  I couldn't believe it!   Indian law says that you can't reveal the sex of a baby before it is born, but there it was - we're having a girl!  I laid there in bed for two hours, unable to sleep, thinking of our little girl and the life we're going to have with her.  Of course, we would love the baby just as much if it were a boy, but this news had me so excited!  After a couple of hours of day dreaming, I looked through the scan again and quickly realized that "Sex: Female" was noted about our surrogate - not the baby!  Oops.  :)

Not knowing the gender is kind of hard.  We're both big planners and not knowing if it's a boy or girl is kind of a big variable when it comes to baby clothes and nursery themes. There are only so many yellow & green onesies.   That being said, this baby already has 84 outfits for its first year.  I counted last weekend.  84.  That means it will wear each outfit about three times.  This baby is going to be so spoiled.

Since we've tempted fate and ignored all of the superstitions about buying baby things before the 2nd trimester and have been going all out since even before we signed the surrogacy contract, it makes total sense to put the nursery together 5 months before the baby will ever see it.  We decided on a nursery theme and have already started putting things together. We went with a bold contrast of monochrome & bright red.  A bit unconventional on nursery color, but it's coming together as a fun room, yet relaxing room.

The next scan is in a month, so hopefully it will be a very boring month for us!
Posted by Brent and Charlie at 2:36 PM