I am one of those people who usually falls asleep as soon as my head hits the pillow and then don't wake up until the alarm clock sounds (if even then).  This baby making business is certainly changing that.  I spent most of last night laying in bed trying to figure out our odds of having a baby on this first try and the extra cost if we don't.

The egg donor that we selected has previously donated, in which case they retrieved nine eggs.  At first this sounded like a pretty good number (it only takes one!), but after a bit of internet research, this sounds on the low side.  Then I started thinking about the odds that they'd fertilize.  Say 65% successful fertilization, we'd have 6 eggs.  Maybe 4 would be good enough to transfer and the other two aren't worth freezing for a second attempt.  Then maybe a 50/50 shot for pregnancy test result.
I know that it isn't simple math and there are million factors, I guess I am just trying to prepare myself.  As the worrier in our relationship, it's impossible not to let my mind go there.  The eggs haven't even been retrieved yet and I am already experiencing the stress of being a parent!

I didn't think I'd be be obsessing over follicle counts, much less know what they are.  We got an email from Dr Shivani this morning saying that everything is on track for our arrival next week and the egg collection.  She said that the antral follicle count is close to 20.  According to google, that could mean anything, so for now, I am focusing on the fact that it is higher than zero!

I have to pinch myself every once in a while to remind myself that this is really happening.  This time next week, I will be standing up from my desk.
To get in my car.
To go to the airport.
To get on a plane.
To land in India.
To start our family.

Two days after returning from three weeks of adventurous travel for the wedding & honeymoon, we found out that we'd be leaving for India 18 days from now.  We initially planned on shipping the "stuff" to New Delhi to save a good bit on flight & hotel costs and because Brent didn't have the vacation time, so it was really going to hit us in the bank.

Jump back to a month ago, we went to make our semen analysis deposits.  Every guy going through surrogacy knows how uncomfortable this is and I won't complain because it's nothing compared to any medical procedure that women go through when trying to conceive.  It was just a nerve wracking experience before, during, and after.  I blame the before on my uncanny ability to worry myself to death before any medical anything (this is one test that you don't want to fail!), I blame the during on the bright fluorescent lights and medical diagrams on the wall not helping me produce sufficient goods, and I blame the after on having all eyes on me as I came out of the little room walking a cup of junk into a waiting room full of blue-haired 60-somethings.

And even through Brent and I went to the same Dr on the same day for a referral to the same lab for the same test, we both got totally different metrics reported back in the results.  Long story short, we emailed the results to Dr. Shivani and she reported back that the results weren't favorable enough for shipping and she'd rather us come to India during the egg collection so that we can provide fresh samples.  Nothing to really worry about (who me? never), there were healthy swimmers in the results, but we'd be better off being a part of the baby making on-site.

So we booked flights from Florida (ouch), booked a hotel on points (whew), got our visas, cleared the absence with our offices, who are going to let us work remote a bit so that we don't lose $ on unpaid leave (whew), and bought a Delhi travel book.  We're set!

In the end, this trip wasn't what we planned, but we are excited about it now.  From the beginning, I wanted to go to India so that we could explore a bit, rather than see it for the first time with a newborn (i.e. see only the hotel and the airport), and so that we could meet Dr. Shivani early on and meet the woman who is going to try to carry a human for us for 9 months (kind of a big deal).  We just didn't want to spend thousands of dollars if there was an option not to, since we don't know how many attempts this will take. Eventually the money will run out and I wanted to be conservative, but now that we have no choice but to make the trip,  we're embracing it and very excited for the adventure.  I think that having this experience in India will make us feel much more connected to the process and makes it all feel much more real.

We shouldn't have unpacked the suitcase!

Brent and I tied the knot! 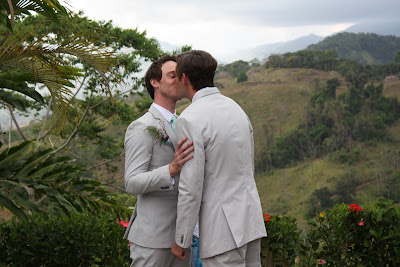 Last month, in front of close family and friends in Costa Rica, we made it official (well, as official as we can until we make it official-official when we get to a state where gay marriage is legal).   There were a few missing people who wanted to be there, but for one reason or another could not make it (we missed you!).  Other than that, it was all absolutely perfect in every way.

We rented out a villa near Dominical, Costa Rica.  It was just us, family, friends, drinks, great food, sunshine, and relaxation.  Everyone there made it perfect.  We wouldn't have wanted it any other way.


I am a pretty calm and collected person, but I cried like a baby while saying my vows.  Looking into my future husbands eyes, declaring this commitment in front of the most important people to us, the moment just got me.  I think that the last time I cried was 1997.  Brent said that was his favorite part, but I am still hoping that doesn't make it into the wedding video (wishful thinking). 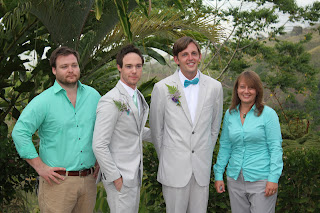 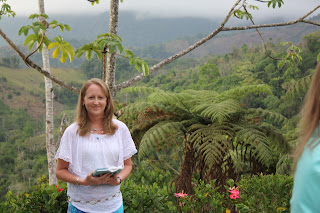 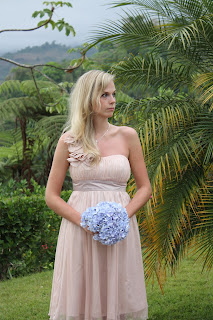 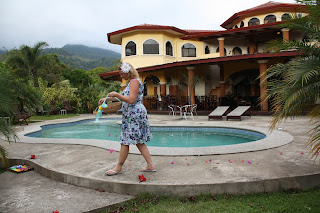 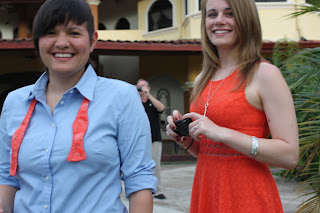 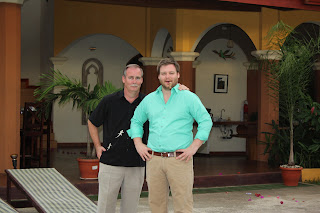 Other than Brandon looking annoyed to be there and Dad being behind the camera, this was the crew. 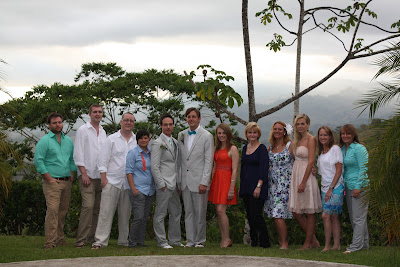 Our villa for the week 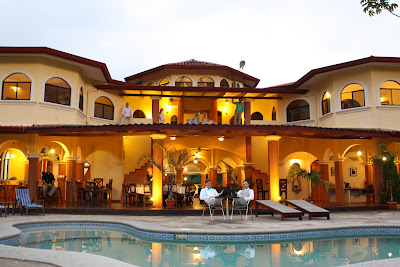 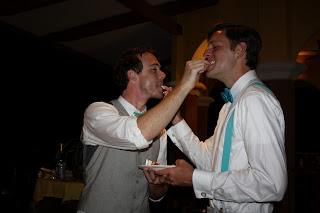 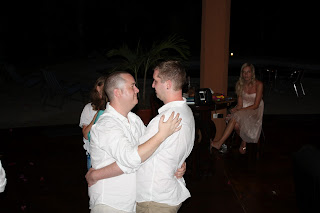 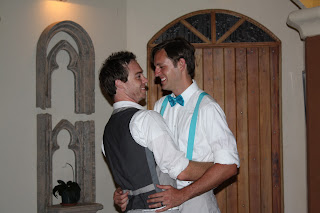 And they lived happily ever after!

Next up, the honeymoon!