Asha is five months now.  How did that happen?! 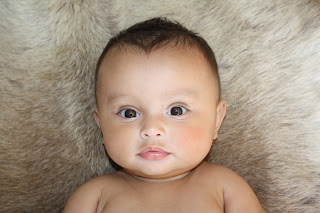 One of the big milestones for this month was that she had a five night streak of sleeping through the night.  The previous record was just one night, so five was pretty awesome.  We're really trying to get into a routine, but we have had some difficulties.  From 3PM-7AM, we're pretty set in a schedule.  7AM-3PM the nanny takes over and we're finding it hard to get her to stick to set naps.  Yesterday, she only slept an hour over that 8 hour period, so when I finally got her down at 4PM, she was an exhausted, overtired nightmare.  This is something we're really trying to work on.
﻿﻿﻿
The other big milestone was that we have started to slowly introduce some solids.  Another work in progress. We gave her a couple of spoonfuls
of Gerber apple sauce and she made some faces I've never seen before. She hated it, but it was hysterical for Brent and I. We've tried adding formula and rice cereal to it to tone it down some, but still not a lot of progress. We'll just have to keep trying new things and get her at the right time. On the days where she did have a few "bites", she slept through the night. It was a tiny bit, so maybe that was coincidence. Not sure.

She has also become a pro with neck control (she was a good bit behind in this department) and is now pretty good at sitting. The funny thing is that she was able to stand long before being able to sit. She may be one of those babies that skips crawling and goes straight to walking. She's been doing a ton of kicking the past week, so I think she is telling us that she wants to be mobile.

I am not sure if she has started teething or not. It seems to come and go. I am curious what others have experienced. There will be a 3 or 4 day span where she seems pretty miserable, sounds like a squeaky door hinge for most of the day, soothes herself by putting everything in her mouth, and practically gnaws off her hand. Then it goes away and she is back to her happy goofy self.