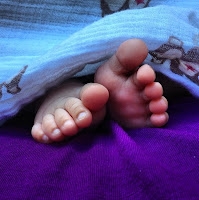 She is trying her hardest to let out a real laugh.  I can't wait to hear it.  For now, it comes out as "heeeee".

For the most part, she has still been doing very well sleeping at night, with only one of us getting up for a bottle around 3-4.  The past two days have been totally out of character with her not really able to sleep much.  I took the first half of the night on the couch with the baby monitor, putting her down no less than 5 times.  Brent took the second half of the night with about the same amount of joy and ending up falling asleep on the nursery floor.  The pleasures of parenthood!


She is playing with her toys a lot more.  She has one that sends her into goofy bliss whenever she activates the lights or sounds which is so much fun to watch (but if I hear that song one! more! time!!).  She has also started to fuss the second that you pick her up if she isn't sleepy.  The second that you put her back down, all smiles and giggles.  Pick her back up, screams bloody murder.  She only wants to be held when she is sleepy.  I certainly don't mind her being miss independent and wanting to explore all around her, but it's just crazy how quickly she has become so interested in the world around her and not just her parents.

We are really hoping that India figures out surrogacy for singles/gay couples soon.  We actually tried to make it into that window of "babies born in 2013", but the pregnancy test was a negative.  There was a tiny part of that result that was relief since the transfer was scheduled only weeks after we left India for baby #1.  Though, most of it was a let down, as any negative attempt would be, with the added worry of it possibly being the last chance we had to give Asha a sibling.  We can always start over somewhere else, but we've already invested 15k for baby #2 and it would really suck to lose that and all of the genetically related embryos that we have frozen in India (15!).  I will certainly keep the complaining to a minimum on this topic because there are so many singles & gay couples out there who are totally childless.  FIGURE IT OUT, INDIA!!

In other news, we're buying a house!  I've never heard of offering asking price for a home and the seller counter offering for 10k higher, but apparently that's the market of Seattle right now.  The seller had other offers for 25k more than we offered, but they accepted our offer because we sent them a picture of us with Asha and a little bit of our story and they liked us.  There are some pretty cool people in this world, to accept less money simply because we were a new family who just happened to be two dads.

Here is a typical morning:

Hope all is well with everyone else.

Posted by Brent and Charlie at 6:11 PM